This is an appropriate time to pay tribute to Anna Fredericka Bernhardt Mueller, wife of Hieronymus. This year marks the 100th anniversary of Fredericka’s death on January 26, 1911. The cause of her death is recorded as a cerebral apoplexy which may have meant a number of things but was most likely a stroke. Funeral services were held at the home of her daughter, Mrs. F. W. Cruikshank, at 346 W William Street in Decatur. Services were attended by a large number of family and friends who were then joined by the factory employees in a march to Greenwood Cemetery. Fredericka was briefly interred at the cemetery mausoleum until the completion of the Mueller family mausoleum.

Fredericka was born in Minden, Prussia (now Germany) in 1839. We have no record of the time or circumstances of her immigration to America, nor of how she came to be introduced to Hieronymus in Freeport, Illinois. She and Hieronymus were married on May 23, 1856 in Freeport, Illinois. This marriage led Hieronymus to follow the advice of his brothers that he should move to Decatur and establish himself and his new family in a town that would grow and prosper. Hieronymus got caught up in the gold fever of the Colorado Gold Rush in 1858 and left for a brief adventure in the West while Fredericka returned to Freeport to stay with her parents while bearing their first child, Henry. The family soon thereafter reunited in Decatur where they remained the rest of their lives. 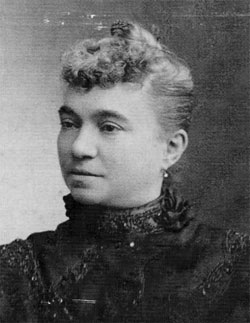 Fredericka received little formal education but acquired enough knowledge on her own to be considered a good Latin scholar and to follow her husband and sons in their business enterprises. In fact, she often accompanied Hieronymus to water works and plumbing trade conventions and, following his death in 1900, continued attending with her sons. She had little interest in taking her place in society, preferring to remain in her home raising her children. Her motherly instincts extended to the employees of Hieronymus and she enjoyed seeing to their welfare.

It is difficult to judge the impact that Fredericka had on the development and growth of the business – women, including wives, had a different role in the social and business structure of the 19th century. She received little recorded credit for her part, but we know that she was totally committed to the success of Hieronymus and backed him in every possible way. She supported his view that money should be invested into the business with the family taking out only what was needed for a simple living standard. She raised her sons with the understanding that they would follow Hieronymus into the business equipped with the same principles of ethics and caring as their father. It is safe to assume that Fredericka Bernhardt Mueller was as exceptional a woman as Hieronymus was an exceptional man.

END_OF_DOCUMENT_TOKEN_TO_BE_REPLACED

While we cannot say with certainty when and how Minnie and Adolph met, we do know from the local newspapers that the two were firmly in each other’s social circles. The two were both graduates of Decatur High School – Adolph belonged to the Class of ’88… 1888 that is! Minnie Bachman graduated with the Class of 1889.