The Story behind the Museum’s new acquisition: The Mueller Sanitary Drinking Fountain 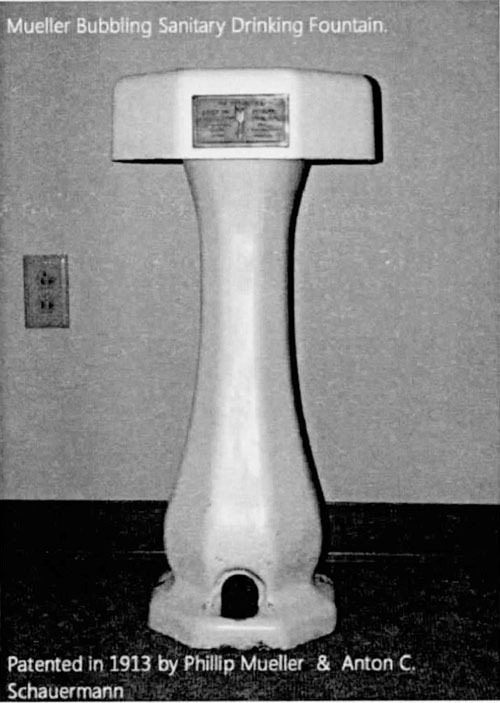 In the summer of 1911, Decatur newspapers were filled with the buzz of the new state law abolishing the public drinking cup. “The Cup of Death”, would soon be a thing of the past. Medical science had identified the communal drinking cup which was chained to a faucet in public places as a source for the spread of deadly epidemics which were sweeping through communities. ‘The battered tin from which we have been accustomed to quench our thirst at the drinking fountains on Lincoln Square and in Central Park will disappear forever.” (Decatur Review 6/14/1911) The concern became how to secure a drink of water at public locations if the cups were no longer available. The immediate solution was found in the sale by retailers of wax cups at about half a cent each or small collapsible metal cup that could be had for ten to thirty-five cents depending on the quality. Many of these cups became advertising devises with store names and information imprinted on them.

While retailers were trying to meet the immediate needs of the public, manufacturers were looking to the long term needs created by this new law. Some versions of drinking fountains were already appearing in public places prior to the passage of this law but, for those citizens who were already microbe conscious, these early fountains didn’t seem to offer much more protection than the cup of death, in that people did not seem to understand how to use the device. “It was pointed out by a traveler that the cup [bubbling cup, early term for the drinking fountain] has no advantages over the old, battered, germ-laden tin cup … for the reason that some be-whiskered, and unsanitary looking individual had glued his lips to the cup [fountain] in drinking, instead of holding his mouth apart and drinking from the stream. Bubbling cups are an innovation and it will probably be some time before the entire public is educated to their proper use.” (Decatur Herald 7/2/1911) Editorials carried comments such as “only loafers fail to carry their own cups” or “beware of borrowers.” One story told of a boy who was asked by a hobo for the loan of his cup. The boy knew he was not to share his cup, so he simply gave it to the hobo who promptly used it and then passed it onto the next fellow waiting. Many people seemed confused about the whole sanitary issue. 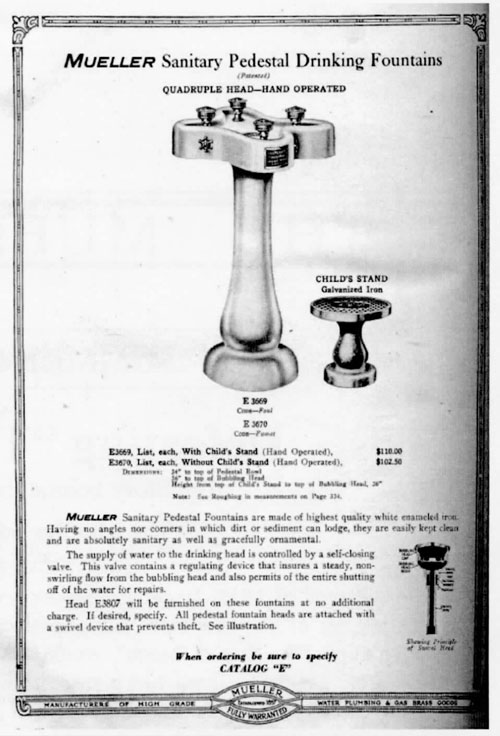 It became apparent that a long term solution was needed and so the race was on amongst manufacturers to create a sanitary drinking fountain for public use. Mueller Mfg. found itself at the forefront of the issue. They had been working on a bubbling fountain and were very close to having it available to the public. In fact, the company had already promised the city one new bubbling fountain for Central Park as a gift. After the city commissioner inspected the fountain prototype, he declared that 4 more fountains in addition to the gift fountain would be purchased for Central Park and Lincoln Square. The Decatur Review published an article describing the benefits of the Mueller bubbling fountain. “It is not only ornamental in appearance but is practical in every way and has a sanitary feature about it that is not possessed by other bubble fountains. This is a fine spray that prevents a person putting his mouth down on top of the nozzle. The fountain is operated by a foot lever. When a person wishes to take a drink, he presses the lever with the foot and the water sprouts up several inches from the nozzle in the center of the fountain. Around this nozzle is a perforated band through which a fine spray is forced up. This spray does not spurt up so high as the column of water in the center but high enough to wet a person’s face if the person drinking gets his mouth too low. No one wants to get a dunking, so he will naturally not try to get the nozzle into his mouth. The moment the foot is taken from the lever the water ceases to flow.”

The fountains that were purchased by the city for Central park were to have 3 bubblers on each fountain, while the ones for Lincoln Square around the transfer house would have four. By 1913 Philip Mueller, along with Mueller employee Anton Schauermann, had received a patent for “The Bubbling Sanitary Fountain”. In 1915 Mueller Co. received an order for 1,850 bubbling fountains for the St. Louis public schools who, after exhaustive research, concluded that the Mueller fountain was the best. Mueller had done its part in vanquishing THE CUP OF DEATH!

END_OF_DOCUMENT_TOKEN_TO_BE_REPLACED

While we cannot say with certainty when and how Minnie and Adolph met, we do know from the local newspapers that the two were firmly in each other’s social circles. The two were both graduates of Decatur High School – Adolph belonged to the Class of ’88… 1888 that is! Minnie Bachman graduated with the Class of 1889.