As many people know, one of Mueller Co.’s early keys to success was their highly trained sales-staff. A quality salesman knew what Mueller products to sell to their customers, but they were often the first to receive consumer requests. Mueller’s traveling salesmen were always able to listen to the needs of their customers, and as a result they were often instigators for change back at the company.

One of the first recorded examples of this pattern came in the form of bathroom fixtures. Mueller Co. announced in their May 1, 1911 Mueller Record that they were ready to look into carrying vitreous ware. The May article (page 3) was a polite request instructing the salesmen to “send illustrations and plate numbers of the designs that seem most likely to prove quick and satisfactory sellers.” However, by the June 1, 1911 Mueller Record, there was a slightly different tone. It appears that few if any salesmen responded to the May Record request, and the salesmen were taken to task for it the following month. The June article begins by asking salesmen to stop their harping and help the executives have an “intelligent” decision process on style and materials. This little article didn’t mince any words! Within a few lines, the Record transitions from a request for information into a chastisement for not providing more complete information quickly enough. And to follow the point, there was a direct note from President Adolph Mueller reminding the sales force to take the monthly publication seriously.

It would take another 13 years for the Mueller Co. to take the next steps towards carrying their own vitreous line. 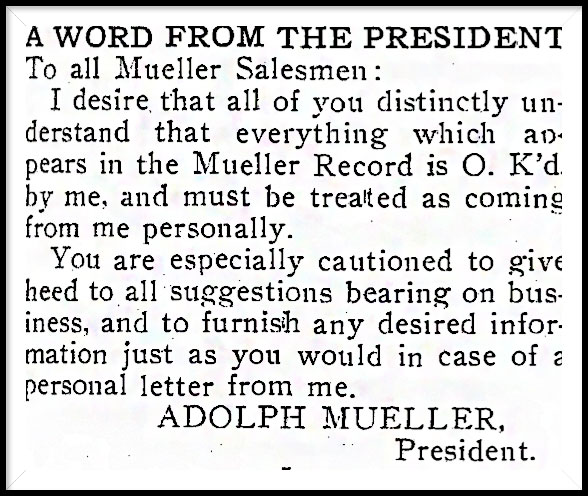 June 1, 1911 Mueller Record
*Reminder that the Mueller Record publication originated as a document to keep salesmen informed of Mueller products. Over time, the Record transitioned into the periodical Mueller workers and their families came to enjoy.

The pressure was on for Philip Cruikshank, a third-generation Mueller new to the business but enthusiastic about the vitreous line, to produce Mueller-quality pieces in large quantities. Cruikshank hired Alfred V. Lawton to design the plant. The large-scale manufacturing of vitreous ware was still in the early stages, but it used an old process known as slip casting. Slip casting is generally credited as a European invention from 1730-1750, though some scholars believe slip casting first appeared in ancient Peru.

The process of slip casting is fairly straightforward. Clay is ground and mixed by machine, and water is added to make it liquid. The mix is then poured into plaster moulds where the water is drawn out and into the plaster. The liquidized clay becomes firm and ready for drying and firing. The plaster moulds were reusable, but required a day to dry between uses. For mass production and to give moulds time to dry, over 100 moulds were made for each design.

“Casting” clay like metal was clearly faster and reduced labor costs. The old method consisted of moulding clay, a time consuming and labor intensive process. As the local Decatur Herald (17 May 1925) pointed out, “The moulding of four or five toilet bowls was a day’s work for a potter.” With this slip casting method, each worker was able to make 15-18 pieces a day. With the lowered cost, average homeowners were able to buy vitreous instead of enameled iron.

While the action of slip casting was straightforward, finding the right mix of clay and water was not. In 1924, the Mueller Co. began a year-and-a-half-long process of trials. They had to experiment with different combinations of clay, moulding, firing, and glazing. In the beginning, the Mueller’s hired an out-of-town expert to do some of the groundwork for the clay combination. However, he had to travel to Decatur to finish the job as Decatur’s local water supply changed the nature of the clay. In the end, Mueller Co. used a combination of 9-11 (different news articles report different numbers) types of clay from Florida, Georgia, England, New England, Illinois, and other locations.

The Mueller Co.’s in-house construction crew began erecting the Vitreous Plant in 1925. The new building covered over 2 acres and was located just south of the river and the new Lake Decatur. The plant included two kilns, approximately 320 feet long, that were in continuous, 24-hour operation. The entire process from mould to glaze took three days.

The new plant was officially opened in March of 1926, but it met with troubles early on. Just after a year of production, the plant was struck by a tornado in May 1927, and repairs took until November 1927 to finish. The damage to the roof and one of kilns was extensive, but the urgency to finish repairs simply wasn’t there. In a statement made to the Decatur Herald (30 September 1927), the Mueller Co. felt they had “sufficient stock on hand.” Adolph Mueller was also quick to point out that Mueller Co. wasn’t the only vitreous ware company suffering a surplus in their warehouses; many other vitreous plants were reporting surplus stock.

The Vitreous Plant did reopen in late 1927, and operated without incident until Mueller Co. announced the plans for a new kiln (replacing the two kilns) in December 1930. The new kiln caused quite a stir in local papers when it was announced that the estimated cost would be $250,000. The kiln was contracted from a company out of Pennsylvania, with the stipulation that Mueller would use as much local labor as possible to complete the construction. The project was set to last 6 weeks, with the kiln going into operation early 1931.

Not much was written about the closing of the vitreous plant. Conjecture leads us to believe that lackluster sales and the Great Depression is what ultimately lead to the plant’s closure in 1933. Local papers barely mention the closing of the plant.

In 1939, after a few months of tension with the War Department, the vitreous plant building found new life as a warehouse for the Civilian Conservation Corps (CCC). However, the United State’s involvement in WWII impacted industrial companies substantially, and in 1942 the Mueller Co. moved back into the old vitreous plant for fulling government contracts. (The Mueller Co.’s wartime production will be detailed in other newsletters.) After the war, the company again leased the plant, this time to Borg-Warner, and ultimately sold the land and the plant to the same corporation in 1950. 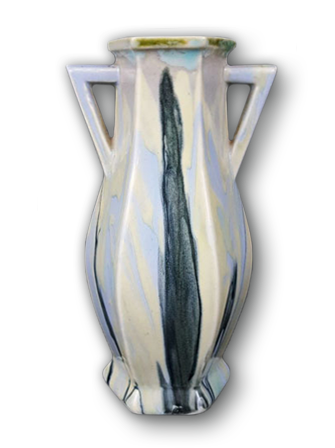 The Mueller Vase known as “End of Day” vases.

There are many rumors and theories surrounding the Mueller vases – which can be found all over the country, especially in Decatur. The most likely story is that they were cast as samples for salesmen to carry to customers about the quality of the vitreous ware and occasionally used as gifts. The pastel rainbow glaze makes each vase unique, but there is an unmistakable shape and “Mueller” stamped on the bottom of each one.

END_OF_DOCUMENT_TOKEN_TO_BE_REPLACED

The Taste of History event returns this year Saturday, October 1 from 5-9pm. During this event, you’ll explore five of Decatur’s history sites while enjoying delicious hors d’oeuves and drinks at each location.

END_OF_DOCUMENT_TOKEN_TO_BE_REPLACED

The Mueller Museum is OPEN

The Hieronymus Mueller Museum is now OPEN to visitors, by appointment only.