The girls of the core room with their appropriately named foreman, “Happy.” March 1924

From Mueller Co.’s beginnings, women have played important roles, both traditional and unusual. Hieronymus Mueller’s wife, Fredericka, was certainly the “woman behind the man” accompanying both Hieronymus and sons on business trips to trade shows as well as seeing to the needs of the Mueller employees and their families. In keeping with established business practices, Hieronymus did not consider business management to be an appropriate place for women and his only daughter, Leda, was left out of the partnership which was formed with his six sons. However, in 1902 Leda Mueller Cruickshank took a seat on the company’s board of directors and the women of the Mueller family continued to serve on the board until the family’s sale of the company in 1986.

By the late 1800’s women were becoming involved in some of the roles that would become traditional for their gender in industry – jobs such as office girls, light assembly work and packing products. However there was early use of women by Mueller Co. in a vital part of the actual manufacturing process — the core room in the foundry operation. The Mueller Record in May, 1943 observed “The question of women in industry was settled by Mueller Co. at least 40 years ago when our core room was ‘manned’ by women. Core making is an important and exacting task. From the beginning women have been used in our various factory departments, where the conditions and character of the work justify a departure from routine. ” The core room girls seem to have enjoyed a special place in the collective heart of the company. They were a spunky lot due to the tough shell needed when working side by side with men at a time in history when this was still uncommon. Nevertheless, they earned the respect of their male counterparts simply by demonstrating that women could be hard working, quality conscious and personable.

Nearly 150 male employees of Mueller Co. left their jobs to join the armed services. The loss of these workers together with the need for increased wartime production and the expansion to three shifts left many jobs to be filled. During this period of time, under the guise of “Rosie the Riveter”, women all over the nation were given the opportunity to demonstrate what they were capable of and this was certainly true at the Mueller Co. In that same 1943 issue of the Mueller Record, being written at the height of the war era, the author states: “For many years the fitness of women for factory work has been debatable. Warm discussions and innumerable arguments in newspapers and magazines for and against, have commanded attention. It’s all over now. The war has settled the question”.

Mueller Co., due to the nature of its business and foundry capabilities, was turned primarily over to the production of munitions for the War Department. Duke Mueller, in a report on the Mueller War Production experience wrote: “We worked round the clock and with three shifts-one big problem (as in our other plants) was the manpower shortage. We began hiring and using women extensively. Women were operating turret lathes, automatics, punch presses, drill presses and so on and they did a very good job turning out parts which had to be manufactured to very close tolerances and to a precision finish.”

Women in Mueller Co. were also given opportunities for self-improvement in more technical areas where previously they had not found entrance. A 1943 Mueller Record report states that “A class of some fifty girls is being given special training in Industrial Arts School of Millikin University under the tutelage of Professors Cole Senior and Junior. This course consists of mechanics, blueprint reading, mathematics, tests and measurements, properties of metals, heat treatments, principles of machine operations, gauge checking and other subjects allied to metal work and machinery. Prof. Cole, Sr., says he has found these girls interested, studious and apt. Mueller Co. not only provides for this educational feature but pays the girls during their student periods on the same basis as that on which they are working in the munitions plant. The students are enthusiastic in the acquiring of the knowledge they are obtaining.” One anecdote that has come to the Museum, is the story of one of these women, whom upon finishing her studies at Millikin, had excelled so well in her program that she was brought back to the company and placed in the Engineering department, the first and, for many years, the sole woman in Engineering. 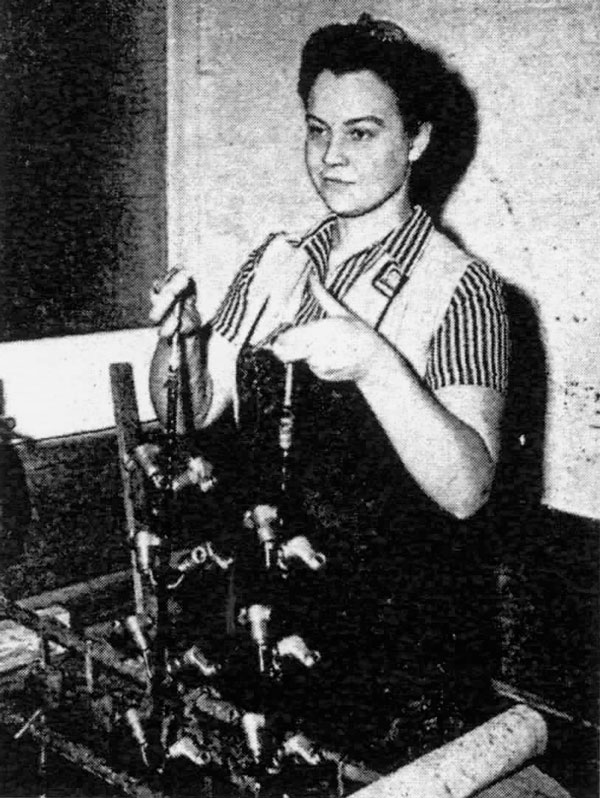 As the nation fought the war in both Europe and the Pacific, many campaigns were engineered as morale boosters for the home population. One of these was the Miss Victory contest with the objective of identifying the typical American girl war worker. Mueller employee Mrs. Evelyn Miller from the Los Angeles plant was chosen by her peers to compete in the Southern California regional contest and was named a finalist only two weeks into the event. In the end, she was not chosen to represent Southern California in the national finals, but the accolades she received from peers and Mueller management were recorded in the Mueller Record: “With the search for Miss Victory of Southern California only two weeks old, the first contest finalist was named yesterday! She is Mrs. Evelyn Miller, 33 year old Electroplater of the Mueller Company. An outstanding worker, Mrs. Miller, the only woman doing her type of work in America, was nominated to represent her company in the November 30 finals by unanimous demand of her fellow women workers.”

This new image of women as Rosies and Miss Victories, and their entry into industry met needs beyond the bolstering of a shortage of manpower. Women found that by going out into the world they were valued not only as a viable work force but also as a morale boost to the home population. Everyone was doing their part to support the troops abroad. Women whose sons, brothers, husbands & fathers were overseas , many never to return, found the work to be a much needed distraction, as well as, contributing to the well-being of their loved ones in the service. One Mueller employee at the Los Angeles plant stated it this way “Our department is filled with girls like myself, who, with husbands or fiances in the service, feel that our work is our duty to the nation.” (Mueller Record January, 1943) The work provided a sense of pride for the nation and for the women themselves. It also served the latent need of women everywhere to put themselves to the test in a predominantly male world. Lastly, it opened the doors to a new future for women.

Although there were some steps backwards when the men returned from war, the advances made by women during those years insured that women would push forward for more and varied opportunities in the future.

Women continue to have a strong presence in the Mueller Company, many holding positions not only on the plant floor and traditional office work but also in managerial positions. Although the water and gas distribution industry remains primarily a male dominated business, Mueller Co. women like Christy McEldowney who serves as Technical Service Manager in Decatur, Kim Lillpop, the Decatur Customer Relations Manager, Decatur Plant Comptroller Kori Segebart and Peggy Fleckenstein, Human Resources Director in the Albertville Plant are showing the way for the future of a growing role that women will play in the company’s future.

The museum’s collection contains numerous photographs of women working in the company before, during and after the war. The faces in these photographs have in most cases become anonymous, in that names of the subjects were not recorded. However, when studying these faces, we are very much aware that we are in the presence of citizens of our own community – mothers, daughters, aunts and grandmothers of people who have walked our streets, raised families and lived as our neighbors. Their pioneering contributions in the workplace, whether necessitated by a need to feed a family or the need to win a war should not be considered separate and apart from their equally valuable contribution to company and community. Mueller Co. has shown pride in their accomplishments and we all owe them a debt of gratitude.